7 Things Banks should do with Blockchain

Most banks are currently investigating or “leveraging blockchain”. Some of them are even testing “use cases” to go beyond the talk and hype.

“We have 13 use cases!” “We have 25 use cases!” “All our business lines are involved” “We traded our first share using blockchain!” “We are conducting our biggest blockchain experiment yet!”

Save a few financial institutions, all of them are working towards the same future scenario: one without the internet of money and the banks in control of a permissioned financial system.

I think this is dangerous and want to share my thoughts on this in my slides/blogpost below.

The blockchain was invented to eliminate the need for trusted third parties, but banks are convinced they can turn this around. Banks want to use blockchains to become more efficient and save costs. The financial sector is actually the ONLY sector in which disintermediation is considered an opportunity rather than a threat by the incumbents. You can call that optimistic, stupid, arrogant… I think it’s wishful thinking and more importantly, dangerous.

The financial services environment seized on blockchain, because they saw within it the possibility of using some elements of bitcoin without being disrupted. ~Andreas Antonopoulos

If you look back at Kodak, they invented the Digital Camera in 1975 and then hid it for years as they saw how it would cannibalize their highly profitable business. The problem was, if they could invent and use it, it would only be a matter of time until someone else would. History has shown us that once a viable and problem-solving solution has been invented, it will become part of our world until it is replaced by something better.

The open blockchain is here to stay

The technology to facilitate the “Internet of Money”, the (open) blockchain, was invented in 2008. It now exists as open source code, which makes it unstoppable by default. 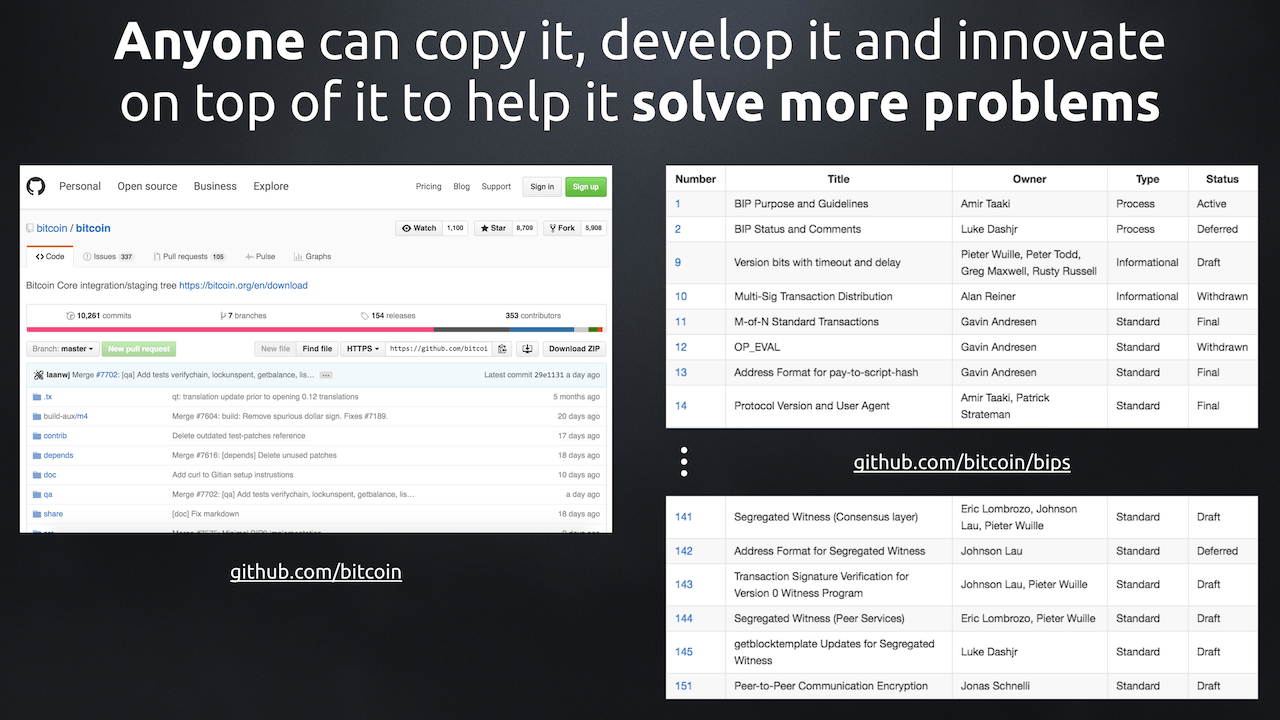 The truth is, the open blockchain is going to continue to exist, regardless of how many people desperately insist on Bitcoin dying. Whether it is Bitcoin, “Bitcoin 2.0”, Ethereum or something else is irrelevant in this case.

There are few financial players that acknowledge this. I have only seen a handful of executives do so. Of course I’m not expecting them to praise or support Bitcoin and I’m definitely not saying banks should abandon their current initiatives. What I do expect from financial service companies is to adapt their strategy to the possibility that an open blockchain will continue to exist and take away part of their business.

Strangely enough, even the notion that this may happen seems to completely elude them. People tend to go as far as reading a few blogposts about Bitcoin or watching a video. After that they instantly dismiss Bitcoin itself (often based on poorly informed journalism) and then praise “blockchain” to the heavens, as a technology to “revolutionize everything”. Next up they begin to experiment with it, usually without having the slightest clue what exactly they are doing. Ironically while doing so, they completely ignore the 7 year old Bitcoin blockchain and everything they can learn from it.

If you assume an open blockchain can never succeed so early into its development and completely focus on a single future scenario, you’re putting all your eggs in one basket. I find it astonishing that people with so much money on the line are willing to take this risk. It’s like libraries hardcore denying the legitimacy, potential and success of the Internet 15-20 years ago, instead of starting to think how they could play a role in the new, open network. History tends to repeat itself, people just wear different costumes.

7 things financial players should do with blockchain

Criticism without offering suggestions is easy, so here are 7 things I think financial players should do instead.

1. Educate everyone, top to bottom, on Bitcoin and the (open) Blockchain

If an open Blockchain is here to stay, your entire company needs to realize this and understand why that is the case. From the presentations I’ve done for financial institutions, I see time and time again how almost nobody in finance really gets it. I can rarely hold a decent conversation without constantly having to correct misconceptions. I don’t blame them, because these are complex topics on top of their existing workload. It is important to address this problem first, before moving on to bigger things.

2. Consistently monitor how the major cryptocurrencies are developing

Any player that is in a sector which is getting disrupted should consistently monitor the market for trends and new players that are developing in it. In finance this is no different. Financial players must actively watch and get involved with the fintech startup scene if they want to react to the developments in it and make the right strategic decisions.

If they want to do anything with a blockchain themselves, they can’t go around the major cryptocurrencies. A cryptocurrency (such as Bitcoin) allows a blockchain to be both open and decentralized due to the incentives it creates for all participants in the network. This enables the same kind of global permissionless innovation that allowed the Internet to grow to billions of users. Your private distributed ledger can never be developed, experimented with and tested to such degree as an open blockchain, so you must carefully watch their developments and learn from them. Your company can’t afford the same mistakes a decentralized network can, as people will know exactly where to complain and who to blame.

3. Get an executive/entrepreneur in a Bitcoin/blockchain company on the board

4. Integrate with a Bitcoin exchange

Highly controversial? Definitely. The USAA is doing it with Coinbase nonetheless. There is a lot to learn by working together with major players in the Bitcoin industry and getting direct feedback from customers in a live environment. This means giving legitimacy to the Bitcoin space, which is why few banks will dare to do it and thus they will miss out on all the potential learnings.

Host or sponsor events where people try to innovate in the Bitcoin/Blockchain space. Your big company is a slow tanker with a lot of legacy constraints. If you want to play a role in a fast moving space, you will need to work with or start ventures alongside your mothership. This is also a great way to identify talents that could potentially add a lot of value to your company, if they are willing to work for it.

6. Create a service for cryptocurrencies

Even more controversial. This service doesn’t need to (and really shouldn’t) be bank-branded, consider it a corporate startup. It is the best way for you to truly gain experience with a working ecosystem, rather than private, small scale testing. It does require you to solve a problem or fulfil a need while using a cryptocurrency, unless you want to copy an existing business model and roll it out in a different market.

7. Innovate outside of your existing (regulatory) framework

For decades, the financial sector has had barely any true innovation. You can tell me whatever you want, but it is 2016 and we still can’t send money around the world as fast and cheap as sending a text message through the existing financial system.

There are clear reasons for this, the system is so incredibly complex and fragile that nobody dares to innovate on it internally. Additionally there is the insane amount of regulation that “protects” the financial sector which makes external innovation near impossible and forces all new players to work with the same rules and constraints as the old ones. At the end of the day, the customer doesn’t care about the reasons, they just want a solution as soon as possible. It is unlikely we’ll get one if we remain within the existing regulatory framework.

If you want to do anything at all with a blockchain or cryptocurrency, do so outside your core business. If you won’t, it will take years and millions to get anywhere, while the open alternatives blast on globally. Speed and the mandate to be able to execute are crucial here. 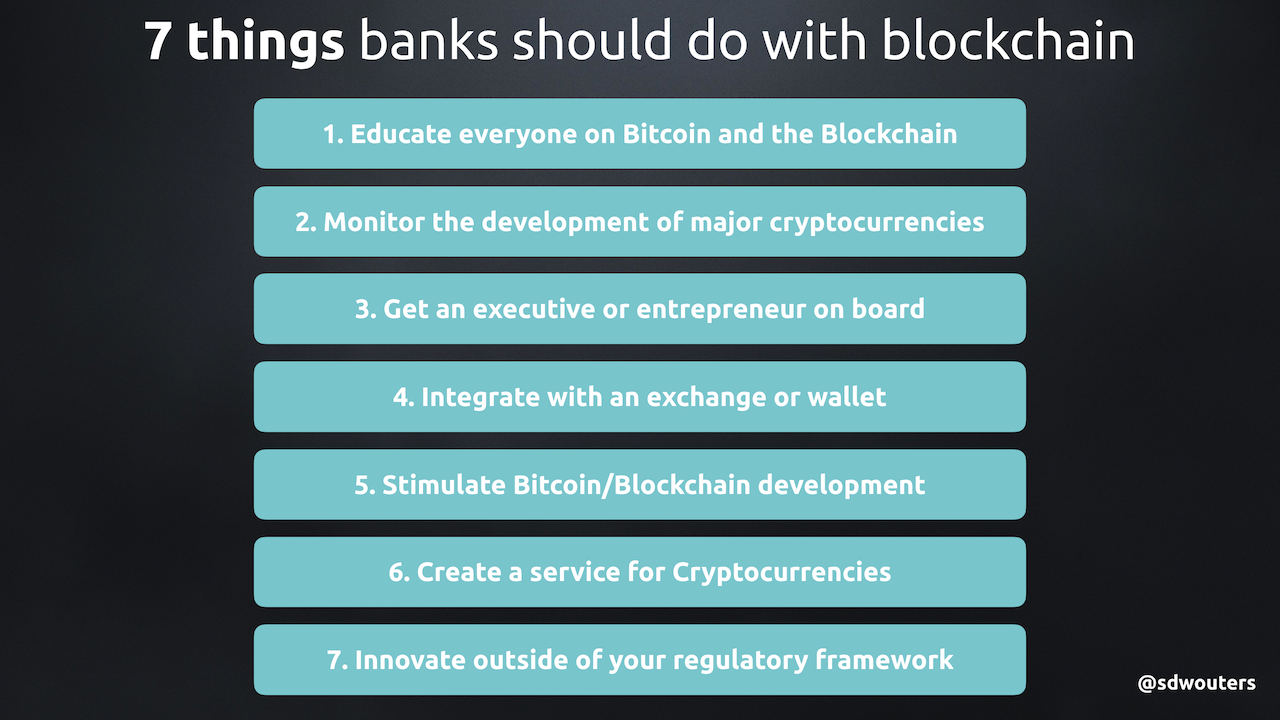 These are my 7 pieces of advice, I hope they opened some eyes and minds to the opportunities. Instead of hoping Bitcoin will die, start playing on the disruptors terms and build a better open, decentralized, immutable and censorship resistant, global financial network.