You may know Bitcoin as digital money that you can send around the world for a tiny fee in minutes. If you’ve heard of it before, you may also be wondering why it still exists when the media, governments and banks told you for years that it can’t be trusted and will die.

Don’t forget that the millions of people all over the world who are now part of the Bitcoin network were once very strong skeptics. This includes people with decades of experience in network security and cryptography. ~Andreas Antonopoulos

If you believe the best days of Bitcoin are behind it, then you have not been paying attention and don’t quite understand how it works. That’s understandable, as Bitcoin is quite complex and the explanations on what it is and how it works are often poorly written. I’d like to do a better job here.

Why does Bitcoin exist?

Most articles make the “mistake” of explaining what Bitcoin is and how it works. They completely ignore the most important question that should be asked about it: why does Bitcoin exist?

Bitcoin was invented so you can transfer digital ownership of something (like money) without using a middleman that takes a fee and/or time (like banks, credit cards, PayPal, Western Union).

It may sound too good to be true, but it isn’t. Technology is constantly improving and automating the things we do in our daily lives, but the financial system has had next to no innovation for decades now, despite being one of the most profitable industries.

It is 2016 and we still cannot send money around the world as easy, fast and cheap as sending a message. International transfers take at least a day and/or a 3-20% fee. On top of that, 40% of the adults worldwide don’t even have access to a bank to begin with. The 60% that does usually has no idea what is really going on with their money behind the scenes. 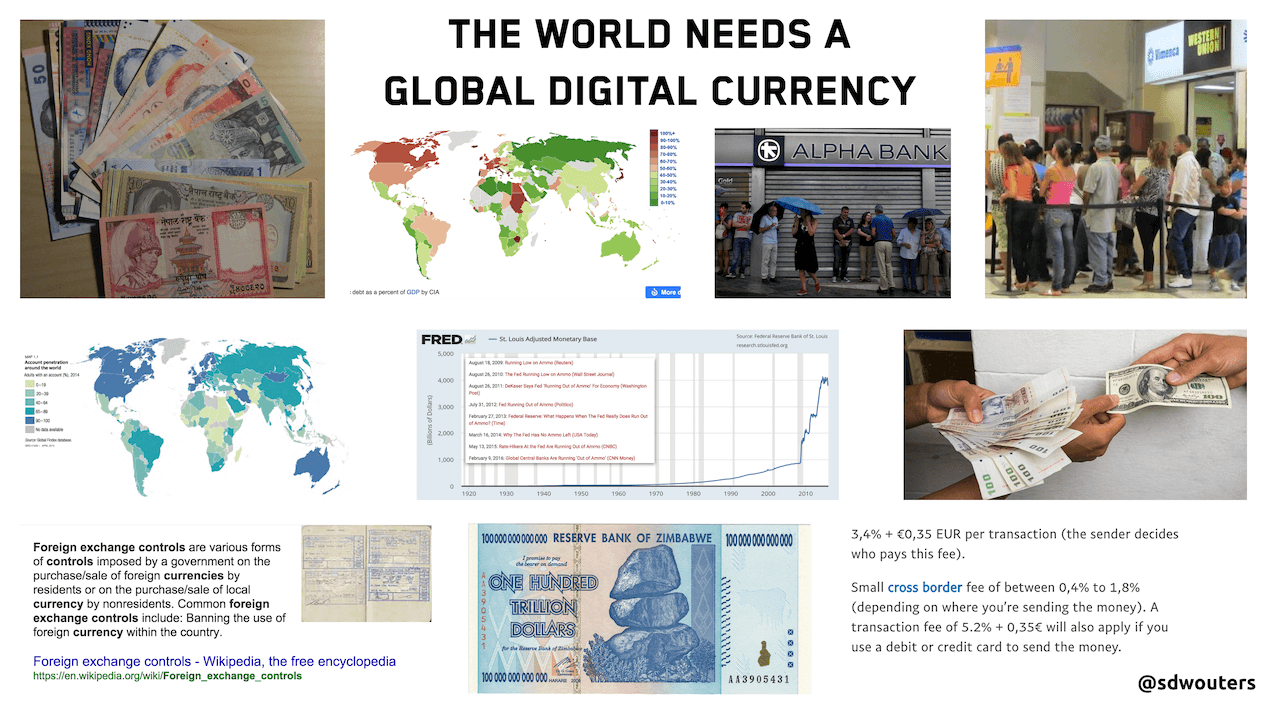 For the digital generation that lives increasingly internationally and online, this is no longer acceptable. Bitcoin is the next logical evolution in the way we exchange money and value around the world. I believe it is going to solve many problems and save those who use it a lot of money.

How does Bitcoin work?

It works fundamentally different in 2 ways: the way the transactions are sent and how it is secured.

Bitcoin transactions are sent directly between people, without a middleman that takes a fee and/or time. These transactions are recorded in the blockchain by bitcoin miners. The blockchain is the technology underlying the Bitcoin network. Miners are people who use their computer power to verify transactions and update the blockchain. This costs the miners energy and thus money, so as a reward for keeping the network secure and running, these miners receive new bitcoins and tiny transaction fees to cover their costs.

About every 10 minutes, the miners create a new block that is linked to all the previous blocks, forming a chain. Hence the name blockchain. This chain of blocks cannot be altered without the rest of the network noticing, so nobody can change, manipulate or undo bitcoin transactions.

If you want to learn more about how the blockchain works, check out my other post about it.

Nearly all organisations and services are centralised. This means there is one point from which the whole thing is controlled, which creates huge targets for hackers. They have a lot to gain by breaking in and thus a lot of money is spent on security. As a result, organisations cage themselves in and users can no longer see what is happening on the inside. We have to fully trust the people in power to not abuse this power and to properly protect our information.

Bitcoin uses the same model as the Internet. There is nobody in the world with the power to decide that we are going to stop using Bitcoin or the Internet, as nobody is in charge of them. There is also no central point from which they can be taken down, which makes them extremely secure networks.

You use the Internet every day, probably without fundamentally understanding how the technology behind it works. You simply trust that it will work the way it is supposed to, based on the rules a lot of smart people created. With Bitcoin we also trust on rules, as they can only be changed if the vast majority of the network agrees. This means no single person can suddenly decide they want to create a lot of bitcoins or take some of them away from others. Everyone that uses the system has an economic interest in good behaviour.

If Bitcoin is so great, why isn’t everyone using it yet?

1. It is like the Internet in the 90s: People don’t understand it. They don’t see how it will change the world and those who are disrupted by it are doing everything they can to stop it. Think of how libraries said for years that the Internet could not be trusted. After all, how can a system anyone can write on be trustworthy? The rest is history, 10 years later the Internet was mainstream and 20 years later even my grandparents started using it.

We now see the banks say the same thing about Bitcoin, as anyone can use it. The truth is that banks and governments aren’t afraid of the handful of criminals that may use cryptocurrencies. They are afraid the rest of us will use them and go beyond their control.

2. Bitcoin is only 7 years old and still needs a lot of development. Every day thousands of people around the world are working hard to develop improvements for the network, like more transactions, even better privacy and totally new ways of using it like automated contracts.

3. The only thing that we’ve tried like this is the Internet, which was about information. Bitcoin is about money and this is so embedded into our lives that it takes time to change.

What really determines Bitcoin’s success is how often people are using it. Like immigrant workers sending money back home to support their families, without paying a 5-20% fee or waiting days. Like businesses sending and receiving money globally, almost free and instantly. Like the consumer trying to buy some shoes online without paying 3-5% extra in (invisible) fees. Like the person without a bank account who still has access to financial tools, even on a ‘dumb’ Nokia phone.

These are the things that matter, and just a few of the problems we can solve with this fantastic new technology.

Bitcoin is the next logical evolution in transferring value

It is 2017, we live increasingly internationally and everything in our lives is getting smarter. It’s about time the way we transfer value does too. Bitcoin is still a young network that requires a lot of development before we fully get there, but it has the potential to make the world a better place and is already doing so today. I hope that after my post, you have an open mind about it too.

If you enjoyed the read, please share it with others!

If you’re interested in learning more, I give presentations about Bitcoin and the Blockchain. I’m also working on filling up my site with lots of information to help you better understand them.